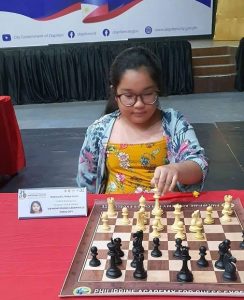 By Marlon Bernardino
Nika Juris Nicolas, a 10 year old from Pasig City emerged as Champion in the Under 11 Girls division of the National Youth and Schools Chess Championships Grand Finals or NYSCC held September 17 – 21, 2022 at Dapitan City Cultural Complex in Zamboanga del Norte, Philippines. Visit chess-results.com for round by round results and cross table.

The NYSCC is a national tournament conducted under the auspices of the Philippine Sports Commission, Philippine Olympic Committee and the National Chess Federation of the Philippines. It brings together the best chess players under 17 years of age all over the Philippines who have successfully hurdled the Pre-eliminations, Eliminations and Semi-Finals.

The Philippine chess community was at awe when the 10 year old chess prodigy Nika Juris Nicolas defeated veteran chess players in the Grand Finals. Representing Pasig City and her school OB Montessori Greenhills, Nika  played under the tutelage of her coaches Lourecel Hernandez Ecot , Von Francisco and Raul Damuy. Her win will entitle her to a Woman Candidate National Master Title.

Nika’s chess prowess was first noticed in the international community when she scored the most number of points for the Philippine Team of Girls Under 10 in the ASEAN Age Group Chess Championships held last April 2022, leading the Philippine Team to a Bronze Medal. She placed 12th best chess player overall for girls under 10 in the ASEAN, with the first to eleventh places taken by players hailing from Vietnam.