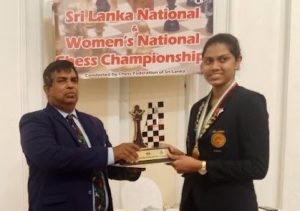 Ranindu Dilshan Liyanage (Ananda College) also had a good event where he dropped only 4 draws and scored 11 points. He was awarded the Silver Medal with Rs. 50,000/=.

Young Thumula Kiriella (Ananda C) did extremely well to win the 3rd place at the Chess Nationals this year. He performed remarkably well and scored 8 points to get the 3rd place with Rs. 30,000/=.

Young Esandi Newansa of Dharmasoka College also did excellent to win the Silver Medal and Rs. 30,000/= with 8 ½ points out of 13 games.  She beat Dasuni in the penultimate round which resulted so many changes happened after the last round.

Dasuni’s poor score on the final day, losing  2 games make her out of Championship, but she made her for the Bronze Medal with 8 points to get Rs. 20,000/= with the Bronze medal.

The selected top 14 players each participated in the each category of the SL National Chess Championships 2021 which was held on the round Robin basis in 13 rounds. The Classical Chess format of 90 minutes with 30 seconds increment from move one was the time control and the winners were crowned as the National Chess Champions for the year 2021. The Event was held from 24th to 30th December 2021 at the Taj Samudra Hotel, Colombo on Thursday with the awards ceremony held as Mr. Luxman Wijesuriya, the President of Chess Federation and Vice President of Asian Chess Federation  as the Chief Guest.