THE IMPORTANCE OF THE ASEAN+ AGE-GROUP CHESS CHAMPIONSHIPS

The ASEAN+ Age-Group Chess Championships, now approaching its third decade, has has been acknowledged to be the single most important catalyst for young talent development in the ASEAN region.

Practically every leading young star, most who are the top players in their countries today, got their first international exposure in this event and many grew over the years in intense but friendly rivalry and competition together!

In fact, many tasted their first success at the ASEAN+ Age-Group Chess Championships.

Over the years, under the leadership of the ASEAN Chess Confederation helmed by Ignatius Leong and other prominent regional leaders including the Philippines Prospero Pichay Jr, Indonesia’s Utut Adianto and Myanmar’s Maung Maung Lwin, the event has grown from strength to strength as the participation summary table below clearly shows, with the high being Singapore in 2015 and the low in Malaysia 2017 last year when the event for once was not given direct titles and norms:

Happily the ASEAN+ Age Group Chess Championships has now had all its privileges restored and is all set to make a resurgence with it being hosted in the country that more than any other proved that Asians could compete on equal terms with the rest of the world.

The 19th ASEAN+ Age-Group Chess Championships as organised by the National Chess Federation of the Philippines  under the auspices of the ASEAN Chess Confederation, endorsed and supported by the Asian Chess Federation and FIDE (World Chess Federation), and will be held from 18-28 June 2018 at the Royal Madalaya Hotel in Davao City. 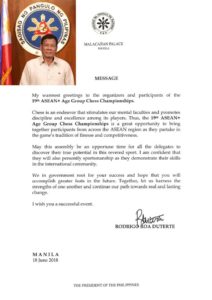 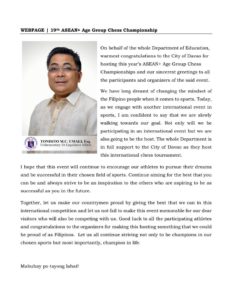 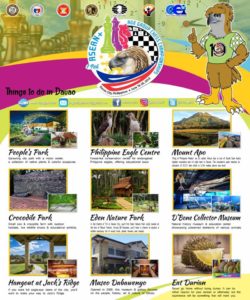 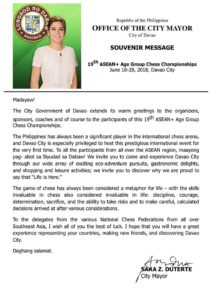 For all information to participate, please download 19TH AAG Brochure