In the ASEAN + Age-Group Chess Championships in Davao, in Standard Chess, Vietnam came, saw and conquered 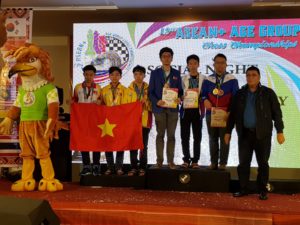 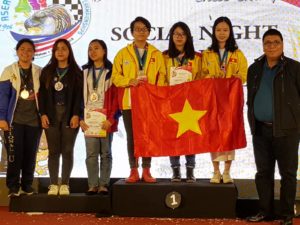 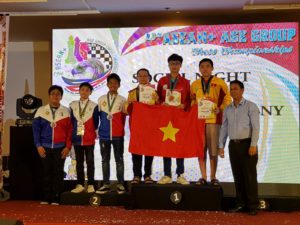 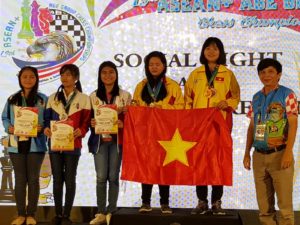 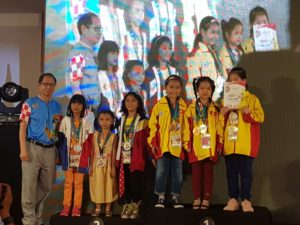 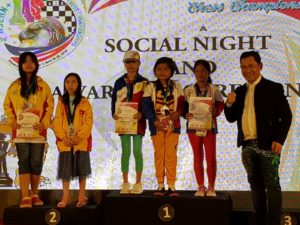 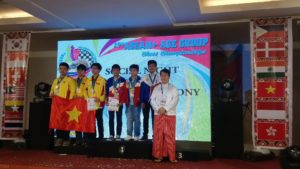 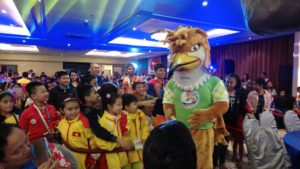 In Latin, it’s Veni, Vidi, Vici, a phrase popularized by Roman general Julius Caesar around 47 BC.

But chess fans and friends can also simply describe it in language we all know: They came, they saw, they conquered.

Of course we all know that the rapid chess and blitz events are yet to come in the next two days become it all comes a fitting end at the Royal Mandaya Hotel so it is not over yet for the defending champions.

Yet, Vietnam came, saw and conquered the 19th ASEAN + Age Group Chess Championships where the real measure of chess competition remains – the blue ribbon standard chess events – where both direct titles and norms were awarded to the medal winners.

Led by a pair of child prodigies ever so eager to scale new heights, the Vietnamese came to Davao City on the southern Philippine island of Mindanao, saw off the scaled-down opposition and conquered eight of 14 age categories.

That’s enough to regain the overall championship in the eight-nation competition billed by the organizing National Chess Federation of the Philippines ( NCFP) and the local hosts as a showcase for the next Wesley So and Janelle Frayna of the host nation.

It was not meant to be. At least for now

This year’s ASEAN + Age Group Chess Championships in beautiful Davao turned out to be another stage for now long time ASEAN chess powerhouse Vietnam to display its long line of young talents getting ready to make their mark in the international scene.

Nguyen Quoc Hy and Dang Le Xuan Hien both posted perfect scores of 9/9 in the boys 12 -under and girls’ 8-under divisions, respectively.

Nguyen finished two and a half points ahead of his closest pursuers, John Jerish Velarde of the Philippines and compatriot Vu Hoang Gia Bao in the boys 12-under.

Dang proved unstoppable in all her nine games and led her Vietnamese teammates Quan My Linh and Ngo Nha Ky to a smashing 1-2-3 finish in the girls 8-under.

Nguyen Lam Thien wound up with 7/9 to rule the boys 14-under. He finished half a point ahead of fellow Vietnamese Dao Minh Nhat and Mai Le Khoi Nguyen, who both have 6.5. 6.5.

Pham Tran Gia Phuc  came through with eight points in the boys 10-under. A close second and third placers were Nguyen Le Minh Phu (6.5) and Vu Ba Khoi (6.5).

Nguyen Vuong Tung Lam and  Le Ngoc Minh Truong both rallied to dislodge Al-Basher “Basty”  Buto and finish 1-2  in the boys’ 8-under class. Buto, who was nicknamed “Vietnamese Slayer” for his smashing 5/5 score against his Vietnamese opponents, fell apart with consecutive losses in the final  two rounds.

But the Filipinos also had plenty of  reasons to celebrate.

Bersamina defeated Sulu champion Sarri Subahani in the eighth round and then agreed to a draw with top seed IM John Marvin Miciano in the ninth and final round to finish with 7.5 points on six wins and three draws.

The 20-year-old Bersamina, who represented the country in the 2014 Olympiad in Tromso, Norway and 2016 Olympiad in Baku, Azerbaijan, also drew his matches against Kyle Rhenzie Sevillano and Jodi Setyaki Azarya of Indonesia.

The triumph was a fittng vindication for the Pasay City-based Bersamina, who finished out of the top 10 in the recent Asian Universities chess championships in Tagaytay City last month. Mendoza, one of the country’s top young female players, humbled Laila Camel Nadera to close out with 7.5 points.

Mendoza, who topped the recent Batumi Olympiad qualifying tournament held in Alphaland Makati, drew with Marife dela Torre in the eighth round earlier in the day.

Antonella Berthe Racasa and Kaye  Lalaine  Regidor  also provided the  final-day surprises to claim the golds  in the girls’ 12-under and 10-under,  respectively.

Regidor took the gold by beating Mecel Angela Gadut in the last round to finish with seven points.

Joining the winners’ roll are Dale  Bernardo and Ronald Canino, who topped the  boys’ 18-under and 16-under categories.

The rest of  the ASEAN

With some of the ASEAN countries staying away from the competition  for still unexplained reasons,  the four-day event turned out to be a dual match between Vietnam and the Philippines.

The Philippines fielded a total of  230 players while Vietnam sent 105 players,

Aside from the Philippines and Vietnam,  only six other countries took part.

These were India (9 players), Indonesia (3 players) and Denmark, Singapore and South Korea and Switzerland (1 player each). 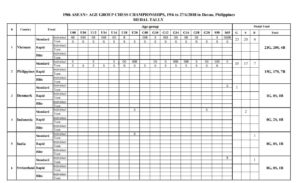